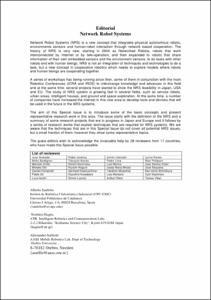 Network Robot Systems (NRS) is a new concept that integrates physical autonomous robots, environments sensors and human–robot interaction through network-based cooperation. The history of NRS is very new, starting in 2004 as Networked Robots, robots that work interconnected by Internet or by tele-operation, and then expanded to robots that share information of their own embedded sensors and the environment sensors, to do tasks with other robots and with human beings. NRS is not an integration of techniques and technologies to do a task, but a new concept in cooperative robotics which needs to explore models where robots and human beings are cooperating together. A series of workshops has being running since then, some of them in conjunction with the main Robotics Conferences (ICRA and IROS) to interchange knowledge and advances in this field and at the same time, several projects have started to show the NRS feasibility in Japan, USA and the EU. The study of NRS system is growing fast in several fields, such as service robots, urban areas, intelligent houses, and ground and space exploration. At the same time, a number of companies have increased the interest in this new area to develop tools and devices that will be used in the future in the NRS systems. The aim of this Special Issue is to introduce some of the basic concepts and present representative research work in this area. The issue starts with the definition of the NRS and a summary of some research projects that are in progress in Japan and Europe and it follows by a series of research works that explain techniques that are required for NRS systems. We are aware that the techniques that are in this Special Issue do not cover all potential NRS issues, but a small fraction of them; however, they show some representative topics.
CitationSanfeliu, Alberto; Hagita, Norihiro; Saffiotti, Alessandro. "Editorial". Robotics and autonomous systems, 2008, vol. 56, núm. 10, p. 791-791.
URIhttp://hdl.handle.net/2117/2697
ISSN0921-8890
Publisher versionhttp://dx.doi.org/10.1016/j.robot.2008.06.002