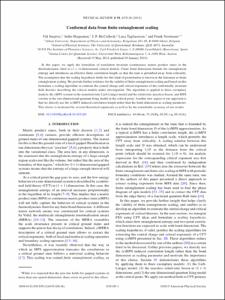 Show full item record
Stojevic, Vid
Haegeman, Jutho
McCulloch, I. P.
Tagliacozzo, Luca
Verstraete, Frank
Document typeArticle
PublisherAPS Physics
Rights accessOpen Access
European Commission's projectENGAGES - ENtanglement renormalization and GAuGE Symmetry (EC-FP7-273524)
Abstract
In this paper, we apply the formalism of translation invariant (continuous) matrix product states in the thermodynamic limit to (1 + 1)-dimensional critical models. Finite bond dimension bounds the entanglement entropy and introduces an effective finite correlation length, so that the state is perturbed away from criticality. The assumption that the scaling hypothesis holds for this kind of perturbation is known in the literature as finite entanglement scaling. We provide further evidence for the validity of finite entanglement scaling and based on this formulate a scaling algorithm to estimate the central charge and critical exponents of the conformally invariant field theories describing the critical models under investigation. The algorithm is applied to three exemplary models; the cMPS version to the nonrelativistic Lieb-Liniger model and the relativistic massless boson, and MPS version to the one-dimensional quantum Ising model at the critical point. Another new aspect to our approach is that we directly use the (c)MPS induced correlation length rather than the bond dimension as scaling parameter. This choice is motivated by several theoretical arguments as well as by the remarkable accuracy of our results.
CitationStojevic, Vid [et al.]. Conformal data from finite entanglement scaling. "PHYSICAL REVIEW B", 20 Gener 2015, vol. 91, núm. 035120.
URIhttp://hdl.handle.net/2117/26930
ISSN1098-0121
Publisher versionhttp://journals.aps.org/prb/abstract/10.1103/PhysRevB.91.035120
Collections
Share: