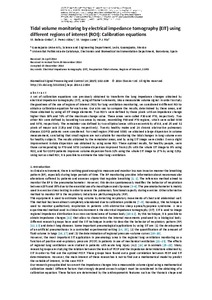 Document typeArticle
Rights accessOpen Access
All rights reserved. This work is protected by the corresponding intellectual and industrial property rights. Without prejudice to any existing legal exemptions, reproduction, distribution, public communication or transformation of this work are prohibited without permission of the copyright holder
Abstract
set of calibration equations was previously obtained to transform the lung impedance changes obtained by electrical impedance tomography (EIT), using all frame's elements, into a measurable volume signal. In order to study the goodness of the use of regions of interest (ROI) for lung ventilation monitoring, we considered 6 different ROI to obtain a calibration equation for each area. Our aim was to compare the results, determined by these areas, and those obtained by using all EIT image elements. Two ROI's were defined by those pixels with an impedance change higher than 30% and 70% of the maximum change value. These areas were called P30 and P70, respectively. Two other ROI were defined by bounding two areas by mouse, resembling P30 and P70 regions, which were called M30 and M70, respectively. The remainder was defined by two elliptical areas with an eccentricity of 0.8, and 25 and 32 pixels of mayor axis (E25p and E32p, respectively). Twenty healthy males and 24 chronic obstructive pulmonary disease (COPD) patients were considered. For small region (P30 and M30) we obtained a large dispersion in volume measurement, concluding that small regions are not suitable for monitoring the tidal changes in lung volume even for healthy subjects. The results obtained by the remainder areas, and by using EIT image were similar. Even a slight improvement in data dispersion was obtained by using some ROI. These optimal results, for healthy people, were those corresponding to P70 and M70 (volume dispersion improved from 12% with the whole EIT image to 9% using ROI), and for COPD patients improves volume dispersion from 32% using the whole EIT image to 27% by using E25p. Using not so small ROI, it is possible to estimate the total lung ventilation.
CitationBalleza, J. [et al.]. tidal volume monitoring by electrical impedance tomography (EIT) using different regions of interest (ROI): calibration equations. "Biomedical signal processing and control", 01 Abril 2015, vol. 18, p. 102-109.
URIhttp://hdl.handle.net/2117/26920
DOI10.1016/j.bspc.2014.12.004
ISSN1746-8094
Publisher versionhttp://www.sciencedirect.com/science/article/pii/S1746809414001992
Collections
Share: