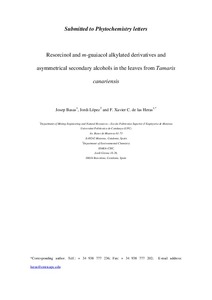 Document typeArticle
Rights accessOpen Access
Abstract
In the study of leaves from the halotolerant saltcedar (Tamarix canariensis Willd.) we have found a new abundant source of resorcinolic as well as guaiacolic compounds. A homologous series of 5-n-alkylresorcinols with long side alkyl chain reported previously in the literature almost exclusively in cereals are described here for the first time in Tamaricaceae. These polyketide derived phenolic compounds are characterized by a series ranging from n-C15 to n-C27 and maximizing at n-C21 including non-negligible amounts of the even-numbered homologues. We also have characterized for the first time as natural compounds a homologous series of 5-n-alkylguaiacols similarly constituted by an odd-numbered alkyl chain linked to the benzene ring at position 5. They also include a hydroxyl group at carbon 1 of the phenolic nucleus and a methoxy group at position 3. The homologues are in the range of 13-27 carbon atoms (Cmax at C21). Finally, we firstly report in Tamaricaceae eight series of unsymmetrical secondary alcohols ranging from n-C25 to n-C35 with hentriacontan-12-ol as the major homologue. This saltcedar leaves waxes contained high amounts of alkylresorcinol (17,2 g/kg dw), alkylguaiacol (14,4 g/kg dw) and secondary alcohols (44,4 g/kg dw).
Citationbasas, J.; López, J.; Heras, F. Resorcinol and m-guaiacol alkylated derivatives and asymmetrical secondary alcohols in the leaves from Tamarix canariensis. "Phytochemistry Letters", Desembre 2014, vol. 10, p. 240-248.
URIhttp://hdl.handle.net/2117/26886
DOI10.1016/j.phytol.2014.10.009
ISSN1874-3900
Publisher versionhttp://www.sciencedirect.com/science/article/pii/S1874390014001852
Collections
Share: