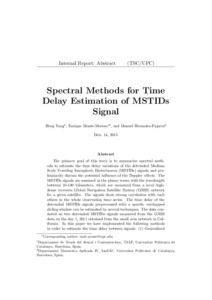 Document typeExternal research report
Rights accessOpen Access
Abstract
The primary goal of this work is to summarize spectral meth- ods to estimate the time delay variations of the detrended Medium Scale Traveling Ionospheric Disturbances (MSTIDs) signals and pre- liminarily discuss the potential infuence of the Doppler e fects. The MSTIDs signals are assumed as the planar waves with the wavelength between 10-100 kilometers, which are measured from a local high- dense receivers Global Navigation Satellite System (GNSS) network for a given satellite. The signals show strong correlation with each others in the whole observation time series. The time delay of the detrended MSTIDs signals preprocessed with a speci c overlapped sliding window can be estimated by several techniques. The data con- sisted on two detrended MSTIDs signals measured from the GNSS data on the day 1, 2011 obtained from the small area network in Cal- ifornia. In this paper we have implemented the following methods in order to estimate the time delay between signals: (1) Generalized cross correlation method, which estimates the time delay in time do- main after the inverse Fourier transform of appropriately weighted cross power spectrum density, (2) generalized phase spectrum method directly measured from the appropriately weighted cross power spec- trum density, (3) phase spectrum di erence method calculated ap- proximately from the fundamental waves of the signals. The results with di erent methods show the similar variation of time delay of two MSTIDs signals. In addition, with the phase spectrum method, the results can present the clear frequency variation of MSTIDs signals which may be in uenced by potential Doppler e ect. Note that the correct estimate of the delays required of a preprocessing of the data. The rst di erence of the Vertical Total Electron Contents (dVTEC) signal was preprocessed by modeling the e ect of the displacement of the satellite by means of a parabolic component, which is subtracted, following by detrend of 60-second intervals, decimation and a further low pass ltering process.
Description
Internal Report
CitationYang, H.; Monte, E.; Hernandez, M. "Internal report. Spectral methods for time delay estimation of MSTIDs signal". 2015.
URIhttp://hdl.handle.net/2117/26830
Collections
Share: