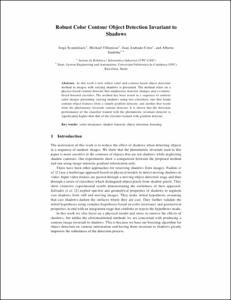 In this work a new robust color and contour based object detection method in images with varying shadows is presented. The method relies on a physics-based contour detector that emphasizes material changes and a contour-based boosted classifier. The method has been tested in a sequence of outdoor color images presenting varying shadows using two classifiers, one that learns contour object features from a simple gradient detector, and another that learns from the photometric invariant contour detector. It is shown that the detection performance of the classifier trained with the photometric invariant detector is significantly higher than that of the classifier trained with gradient detector.
CitationScandaliaris, Jorge; Villamizar, Michael; Andrade-Cetto, Juan; Sanfeliu, Alberto. "Robust color contour object detection invariant to shadows". 12th Iberoamerican Congress on Pattern Recognition (CIARP), Valparaiso, Xile, 2007. A: Lecture Notes in Computer Science, vol. 4756. Berlin, Alemanya: Springer Verlag, 2008, p. 301 - 310.
URIhttp://hdl.handle.net/2117/2682