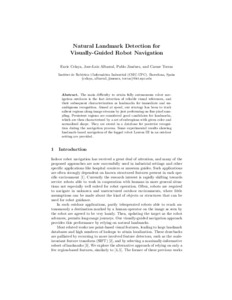 The main difficulty to attain fully autonomous robot navigation outdoors is the fast detection of reliable visual references, and their subsequent characterization as landmarks for immediate and unambiguous recognition. Aimed at speed, our strategy has been to track salient regions along image streams by just performing on-line pixel sampling. Persistent regions are considered good candidates for landmarks, which are then characterized by a set of subregions with given color and normalized shape. They are stored in a database for posterior recognition during the navigation process. Some experimental results showing landmark-based navigation of the legged robot Lauron III in an outdoor setting are provided.
CitationCelaya, Enric; Albarral, José L.; Jiménez, Pablo; Torras, Carme. "Natural landmark detection for visually-guided robot navigation". 10th Congress of the Italian Association for Artificial Intelligence (AI*IA ), Roma, Italia, 2007. A: Lecture Notes in Computer Science, vol. 4733. Berlin, Alemanya: Springer, 2007, p. 555 - 566.
URIhttp://hdl.handle.net/2117/2670