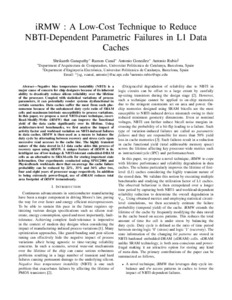 Document typeConference report
PublisherInstitute of Electrical and Electronics Engineers (IEEE)
Rights accessOpen Access
Abstract
Negative bias temperature instability (NBTI) is a major cause of concern for chip designers because of its inherent ability to drastically reduce silicon reliability over the lifetime of the processor. Coupled with statistical variations of process parameters, it can potentially render systems dysfunctional in certain scenarios. Data caches suffer the most from such phenomenon because of the unbalanced duty cycle ratio of SRAM cells and maximum intrinsic susceptibility to process variations. In this paper, we propose a novel NBTI-aware technique, invert-Read-Modify-Write (iRMW) that can improve the functional yield of the data cache significantly over its lifetime. Using architecture-level benchmarks, we first analyse the impact of activity factor and workload variation on NBTI-induced failures in data caches. iRMW is then used as a means to balance the duty cycle by alternating between recovery and stress cycle upon successive read accesses to the cache line. The highly transient nature of the data stored in L1 data cache aides this process of recovery upon using iRMW. A unique feature of iRMW is its intelligent use of low-leakage & NBTI-tolerant embedded-DRAM cells as an alternative to SRAM-cells for storing important state information. Our experiments conducted using SPEC2006 and PhysicsBench workloads show that on-average the cache failure probability can be reduced by 22%, 33% and 36% after two, four and eight years of processor usage respectively. In addition to being extremely power-frugal, use of eDRAM reduces total area footprint of iRMW tremendously.
CitationGanapathy, S. [et al.]. iRMW: A low-cost technique to reduce NBTI-dependent parametric failures in L1 data caches. A: IEEE International Conference on Computer Design. "2014 32nd IEEE International Conference on Computer Design (ICCD): October 19 - 22, 2014 Seoul, Korea". Seoul: Institute of Electrical and Electronics Engineers (IEEE), 2014, p. 68-74.
URIhttp://hdl.handle.net/2117/26673
DOI10.1109/ICCD.2014.6974664
ISBN978-1-4799-6492-5
Publisher versionhttp://ieeexplore.ieee.org/xpl/articleDetails.jsp?arnumber=6974664
Collections
Share: