A double closed loop to enhance the quality of life of Parkinson's disease patients: REMPARK system 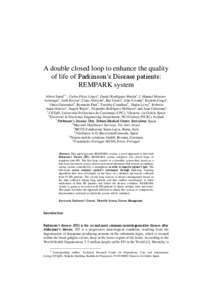 This paper presents REMPARK system, a novel approach to deal with Parkinson's Disease (PD). REMPARK system comprises two closed loops of actuation onto PD. The first loop consists in a wearable system that, based on a belt-worn movement sensor, detects movement alterations that activate an auditory cueing system controlled by a smartphone in order to improve patient's gait. The belt-worn sensor analyzes patient's movement through real-time learning algorithms that were developed on the basis of a database previously collected from 93 PD patients. The second loop consists in disease management based on the data collected during long periods and that enables neurologists to tailor medication of their PD patients and follow the disease evolution. REMPARK system is going to be tested in 40 PD patients in Spain, Ireland, Italy and Israel. This paper describes the approach followed to obtain this system, its components, functionalities and trials in which the system will be validated.
CitationSama, A. [et al.]. A double closed loop to enhance the quality of life of Parkinson's disease patients: REMPARK system. A: KES International Conference on Innovation in Medicine and Healthcare. "Innovation in Medicine and Healthcare 2014". San Sebastian: IOS Press, 2014, p. 115-124.
URIhttp://hdl.handle.net/2117/26663
DOI10.3233/978-1-61499-474-9-115
ISBN978-1-61499-473-2
Publisher versionhttp://ebooks.iospress.nl/publication/38629