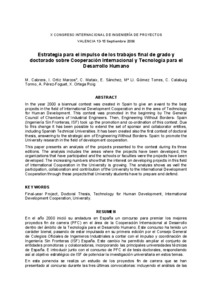 In the year 2000 a biannual contest was created in Spain to give an award to the best projects in the field of International Development Cooperation an d in the area of Technology for Human Development. This contest was promoted in the beginning by The General Council of Chambers of Industrial Engineers. Then, Engineering Without Borders - Spain (Ingeniería Sin Fronteras, ISF) took up the promotion and co - ordination of this contest. Due to this change it has been possible to extend the set of sponsor and collaborator entities, including Spanish Technical Universities. It has been created also the first contest of doctoral thesis, answering to the strategic aim of Engineering Without Borders - Spain: to promote the University research in the field of development cooperation. This paper presents an analysis of the projects presented to the contest during its three editions. The analysis includes the areas where the projects have been developed, the organizations that have participated and the schools or faculties were the projects have been developed. The increasing numbers show that the interest on developing projects in this field of International Cooperation in the University is growing. The analysis shows as well the participation, collaboration and contribution of the University to the International Development Cooperation through these projects that University students have to prepare and defend
CitationCabrera, M. [et al.]. Estrategia para el impulso de los trabajos final de grado y doctorado sobre Cooperación Internacional y Tecnología para el Desarrollo Humano. A: International Congress on Project Engineering. "X Congreso Internacional de Ingeniería de Proyectos". Valencia: Universidad Politécnica de Valencia, 2006, p. 1-12.
URIhttp://hdl.handle.net/2117/26656
ISBN84-9705-988-3