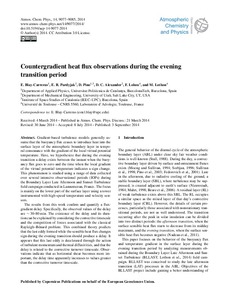 Alexander, Daniel
Lohou, Fabienne
Lothon, Marie
Document typeArticle
Rights accessOpen Access
Abstract
Gradient-based turbulence models generally assume that the buoyancy flux ceases to introduce heat into the surface layer of the atmospheric boundary layer in temporal consonance with the gradient of the local virtual potential temperature. Here, we hypothesize that during the evening transition a delay exists between the instant when the buoyancy flux goes to zero and the time when the local gradient of the virtual potential temperature indicates a sign change. This phenomenon is studied using a range of data collected over several intensive observational periods (IOPs) during the Boundary Layer Late Afternoon and Sunset Turbulence field campaign conducted in Lannemezan, France. The focus is mainly on the lower part of the surface layer using a tower instrumented with high-speed temperature and velocity sensors.; The results from this work confirm and quantify a flux-gradient delay. Specifically, the observed values of the delay are similar to 30-80 min. The existence of the delay and its duration can be explained by considering the convective timescale and the competition of forces associated with the classical Rayleigh-Benard problem. This combined theory predicts that the last eddy formed while the sensible heat flux changes sign during the evening transition should produce a delay. It appears that this last eddy is decelerated through the action of turbulent momentum and thermal diffusivities, and that the delay is related to the convective turnover timescale. Observations indicate that as horizontal shear becomes more important, the delay time apparently increases to values greater than the convective turnover timescale.
CitationBlay, E. [et al.]. Countergradient heat flux observations during the evening transition period. "Atmospheric chemistry and physics", 03 Setembre 2014, vol. 14, núm. 17, p. 9077-9085.
URIhttp://hdl.handle.net/2117/26578
DOI10.5194/acp-14-9077-2014
ISSN1680-7316
Publisher versionhttp://www.atmos-chem-phys.net/14/9077/2014/acp-14-9077-2014.html
Collections
Share: