A Conceptual framework for multi-scale cellular Modeling of Spatial Change 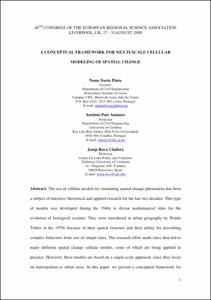 The use of cellular models for simulating spatial change phenomena has been a subject of intensive theoretical and applied research for the last two decades. This type of models was developed during the 1940s to devise mathematical rules for the evolution of biological systems. They were introduced in urban geography by Waldo Tobler in the 1970s because of their spatial structure and their ability for describing complex behaviors from sets of simple rules. The research effort made since then led to many different spatial change cellular models, some of which are being applied in practice. However, these models are based on a single-scale approach, since they focus on metropolitan or urban areas. In this paper, we present a conceptual framework for 2 multi-scale cellular modeling of spatial change, involving the regional and the metropolitan/urban level, as well as the interactions between them. Several important issues regarding the formulation of a multi-scale cellular model are discussed in detail, such as cell dimension, neighborhood format, transition potential measures, calibration procedures, and policy testing.
CitationNorte Pinto, Nuno; Roca Cladera, Josep. A Conceptual framework for multi-scale cellular Modeling of Spatial Change. A: 48 Congress of the European Regional Science Association. Liverpool: el congrés, 2008. Pàg. 1-18.
URIhttp://hdl.handle.net/2117/2657