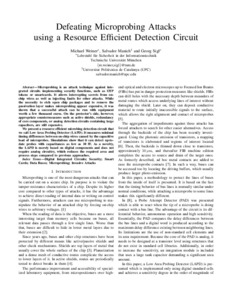 Microprobing is an attack technique against integrated circuits implementing security functions, such as OTP tokens or smartcards. It allows intercepting secrets from onchip wires as well as injecting faults for other attacks. While the necessity to etch open chip packages and to remove the passivation layer makes microprobing appear expensive, it was shown that a successful attack can be run with equipment worth a few thousand euros. On the protector’s side, however, appropriate countermeasures such as active shields, redundancy of core components, or analog detection circuits containing large capacitors, are still expensive. We present a resource efficient microbing detection circuit that we call Low Area Probing Detector (LAPD). It measures minimal timing differences between on-chip wires caused by the capacitive load of microprobes. Simulations show that it can detect up-todate probes with capacitances as low as 10 fF. As a novelty, the LAPD is merely based on digital components and does not require analog circuitry, which reduces the required area and process steps compared to previous approaches.
CitationWeiner, M.; Manich, S.; Sigl, G. Defeating microprobing attacks using a resource efficient detection circuit. A: Conference on Design of Circuits and Integrated Systems. "XXIX Conference on Design of Circuits and Systems". Madrid: 2014, p. 1-6.
URIhttp://hdl.handle.net/2117/26536