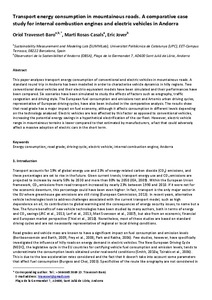 Jover Comas, Eric
Tipus de documentArticle
Condicions d'accésAccés obert
Abstract
This paper analyses transport energy consumption of conventional and electric vehicles in mountainous roads. A standard round trip in Andorra has been modelled in order to characterise vehicle dynamics in hilly regions. Two conventional diesel vehicles and their electric-equivalent models have been simulated and their performances have been compared. Six scenarios have been simulated to study the effects of factors such as orography, traffic congestion and driving style. The European fuel consumption and emissions test and Artemis urban driving cycles, representative of European driving cycles, have also been included in the comparative analysis. The results show that road grade has a major impact on fuel economy, although it affects consumption in different levels depending on the technology analysed. Electric vehicles are less affected by this factor as opposed to conventional vehicles, increasing the potential energy savings in a hypothetical electrification of the car fleet. However, electric vehicle range in mountainous terrains is lower compared to that estimated by manufacturers, a fact that could adversely affect a massive adoption of electric cars in the short term.
Localització
1: Andorra
CitacióTravesset-Baro, O.; Rosas-Casals, M.; Jover, E. Transport energy consumption in mountainous roads. A comparative case study for internal combustion engines and electric vehicles in Andorra. "Transportation research. Part D, transport and environment", Gener 2015, vol. 34, p. 16-26.
URIhttp://hdl.handle.net/2117/26505
DOI10.1016/j.trd.2014.09.006
ISSN1361-9209
Col·leccions
Comparteix: