Willingness to pay for noise reduction in residential areas affected by airport traffic: the case of Barcelona 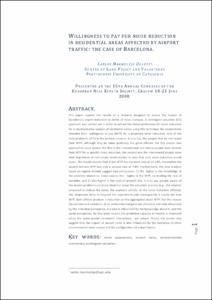 Document typeConference lecture
Rights accessOpen Access
Abstract
This paper reports the results of a research designed to assess the impact of Barcelona’s airport extension in terms of noise increase. A contingent valuation (CV) approach was carried out in order to extract the stated preference for noise reduction for a representative sample of residential areas; using this technique the respondents revealed their willingness to pay (WTP) for a proposed noise reduction. One of the main problems of CV is the protest answers, it is to say, the people that do not reveal their WTP, although they do value positively the good offered. For this reason two approaches were tested: the first is the conventional one where people state directly their WTP for a specific noise reduction; the second one the interviewed people state their hypothesis of real estate revalorization in case that such noise reduction would occur. The results reveals that direct WTP has a protest rate of 37.19%, meanwhile the second indirect WTP has only a protest rate of 7.8%. Furthermore, the data analysis based on logistic models suggest two conclusions: 1) the higher is the knowledge of the problem related to noise source, the higher is the WTP, controlling the rest of variables, and 2) also higher is the level of protest rate. It is to say, people aware of the airport problems are more skeptical about the valuation process (e.g.: the solution proposed to reduce the noise, the payment vehicle, or the noise reduction offered), this skepticism drive to boycott the experiment and consequently it masks the true WTP. Both effects produce a reduction on the aggregated mean WTP. For this reason the opinion and valuation of an environmental good (as silence) is not only influenced by the individual perception, but also is influenced by the knowledge about it, and the social perception; for this latter reason the predictive capacity of models is improved when the socio‐spatial correlation interactions are solved. Finally the results also suggest that the impact of airport noise is also influenced by the existence of other environmental noise source and the configuration of urban fabrics.
CitationMarmolejo Duarte, Carlos. Willingness to pay for noise reduction in residential areas affected by airport traffic: the case of Barcelona. A: 15th Annual Congress of the European Real Estate Society. Cracòvia: el congrés, 2008. Sense paginar.
URIhttp://hdl.handle.net/2117/2648
Collections
Share: