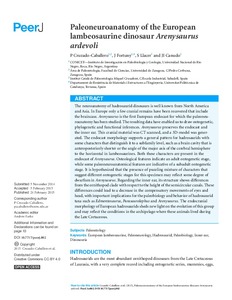 LLácer, Sergio
Canudo, JI
Document typeArticle
Rights accessOpen Access
All rights reserved. This work is protected by the corresponding intellectual and industrial property rights. Without prejudice to any existing legal exemptions, reproduction, distribution, public communication or transformation of this work are prohibited without permission of the copyright holder
Abstract
The neuroanatomy of hadrosaurid dinosaurs is well known from North America and Asia. In Europe only a few cranial remains have been recovered that include the braincase. Arenysaurus is the first European endocast for which the paleoneuroanatomy has been studied. The resulting data have enabled us to draw ontogenetic, phylogenetic and functional inferences. Arenysaurus preserves the endocast and the inner ear. This cranial material was CT scanned, and a 3D-model was generated. The endocast morphology supports a general pattern for hadrosaurids with some characters that distinguish it to a subfamily level, such as a brain cavity that is anteroposteriorly shorter or the angle of the major axis of the cerebral hemisphere to the horizontal in lambeosaurines. Both these characters are present in the endocast of Arenysaurus. Osteological features indicate an adult ontogenetic stage, while some paleoneuroanatomical features are indicative of a subadult ontogenetic stage. It is hypothesized that the presence of puzzling mixture of characters that suggest different ontogenetic stages for this specimen may reflect some degree of dwarfism in Arenysaurus. Regarding the inner ear, its structure shows differences from the ornithopod clade with respect to the height of the semicircular canals. These differences could lead to a decrease in the compensatory movements of eyes and head, with important implications for the paleobiology and behavior of hadrosaurid taxa such as Edmontosaurus, Parasaurolophus and Arenysaurus. The endocranial morphology of European hadrosaurids sheds new light on the evolution of this group and may reflect the conditions in the archipelago where these animals lived during the Late Cretaceous
CitationCruzado-Caballero, P. [et al.]. Paleoneuroanatomy of the European lambeosaurine dinosaur Arenysaurus ardevoli. "PeerJ", 24 Febrer 2015, p. 1-16.
URIhttp://hdl.handle.net/2117/26477
DOI10.7717/peerj.802
ISSN2167-8359
Publisher versionhttps://peerj.com/articles/802.pdf
Collections
Share: