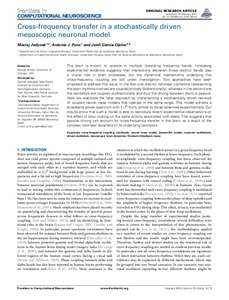 Document typeArticle
Rights accessOpen Access
European Commission's projectNETT - Neural Engineering Transformative Technologies (EC-FP7-289146)
Abstract
The brain is known to operate in multiple coexisting frequency bands. Increasing experimental evidence suggests that interactions between those distinct bands play a crucial role in brain processes, but the dynamical mechanisms underlying this cross-frequency coupling are still under investigation. Two approaches have been proposed to address this issue. In the first one distinct nonlinear oscillators representing the brain rhythms involved are coupled actively (bidirectionally), whereas in the second one the oscillators are coupled unidirectionally and thus the driving between them is passive. Here we elaborate the latter approach by implementing a stochastically driven network of coupled neural mass models that operate in the alpha range. This model exhibits a broadband power spectrum with 1/fb form, similar to those observed experimentally. Our results show that such a model is able to reproduce recent experimental observations on the effect of slow rocking on the alpha activity associated with sleep. This suggests that passive driving can account for cross-frequency transfer in the brain, as a result of the complex nonlinear dynamics of its underlying oscillators.
CitationJedynak, M.; Pons, A. J.; García-Ojalvo, J. Cross-frequency transfer in a stochastically driven mesoscopic neuronal model. "Frontiers in computational neuroscience", 16 Febrer 2015, vol. 9, p. 1-12.
URIhttp://hdl.handle.net/2117/26462
DOI10.3389/fncom.2015.00014
ISSN1662-5188
Collections
Share: