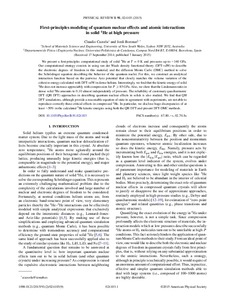 Except where otherwise noted, content on this work is licensed under a Creative Commons license : Attribution-NonCommercial-NoDerivs 3.0 Spain
Abstract
We present a first-principles computational study of solid He-4 at T = 0 K and pressures up to similar to 160 GPa. Our computational strategy consists in using van der Waals density functional theory (DFT-vdW) to describe the electronic degrees of freedom in this material, and the diffusion Monte Carlo (DMC) method to solve the Schrodinger equation describing the behavior of the quantum nuclei. For this, we construct an analytical interaction function based on the pairwise Aziz potential that closely matches the volume variation of the cohesive energy calculated with DFT-vdW in dense helium. Interestingly, we find that the kinetic energy of solid He-4 does not increase appreciably with compression for P >= 85 GPa. Also, we show that the Lindemann ratio in dense solid He-4 amounts to 0.10 almost independently of pressure. The reliability of customary quasiharmonic DFT (QH DFT) approaches in describing quantum nuclear effects in solids is also studied. We find that QH DFT simulations, although provide a reasonable equation of state in agreement with experiments, are not able to reproduce correctly these critical effects in compressed He-4. In particular, we disclose huge discrepancies of at least similar to 50% in the calculated He-4 kinetic energies using both the QH DFT and present DFT-DMC methods.
CitationCazorla, C.; Boronat, J. First-principles modeling of quantum nuclear effects and atomic interactions in solid He-4 at high pressure. "Physical review B: condensed matter and materials physics", 07 Gener 2015, vol. 91, núm. 2, p. 1-9.
URIhttp://hdl.handle.net/2117/26453
DOI10.1103/PhysRevB.91.024103
ISSN1098-0121
Publisher versionhttp://journals.aps.org/prb/abstract/10.1103/PhysRevB.91.024103
Collections
Share: