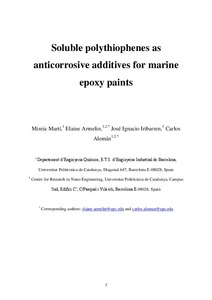 Document typeArticle
Rights accessOpen Access
Abstract
This study compares the resistance against corrosion of a marine epoxy primer modified with Zn-3(PO4)(2) (10 wt%) or a small concentration (0.3 wt%) of conducting polymer (CP) as inorganic or organic anticorrosive pigment, respectively. More specifically, the behavior of three different CPs has been evaluated: polyaniline (PAni) emeraldine base, poly(3-thiophen-3-yl-acrylic acid methyl ester) and poly(2-thiophen-3-yl-malonic acid dimethyl ester), the latter two being soluble polythiophene (PTh) derivatives bearing carboxylate side groups. In a first stage, the structural, thermal, and mechanical properties of all the modified epoxy coatings were characterized using infrared spectroscopy, thermogravimetric analyses and stress-strain assays, respectively. After this, accelerated corrosion assays have evidenced that the degree of protection imparted by a small concentration of PAni is higher than that obtained using 10wt% of Zn-3(PO4)(2). Indeed, PAni has been found to be more effective as anticorrosive additive than the two PTh derivatives. This fact has been attributed to the electroactivity of the former, which is higher than that of the latter. Thus, the ability to store charge has been proposed to be also responsible of protection against corrosion imparted by organic additives, based on CPs.
CitationMartí, M. [et al.]. Soluble polythiophenes as anticorrosive additives for marine epoxy paints. "Materials and corrosion", 01 Gener 2015, vol. 66, núm. 1, p. 23-30.
URIhttp://hdl.handle.net/2117/26429
DOI10.1002/maco.201307132
ISSN0947-5117
Publisher versionhttp://onlinelibrary.wiley.com/doi/10.1002/maco.201307132/abstract;jsessionid=12AC8C8FE695B9B114D58C9BAB6AE646.f01t03
Collections
Share: