Correlation denormalization in interferometric or polarametric radiometers: a unified approach 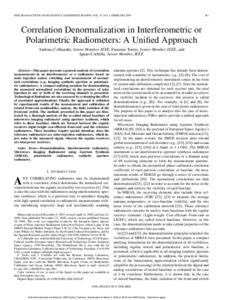 This paper presents a general analysis of correlation measurements in an interferometer or a radiometer based on noise injection and/or switching and measurement of normalized correlations (e.g., imaging synthetic aperture or polarimetric radiometers). A compact unifying notation for denormalizing the measured normalized correlations in the presence of noise injection in one or both of the receiving channels is presented. Technological limitations are also assessed by evaluating the effect of associated approximations. Finally, the approach is validated by experimental results of the measurement and calibration of related front-end nonidealities, namely, the finite isolation of the front-end switch. The methods presented in this paper are illustrated by a thorough analysis of the so-called mixed baselines of microwave imaging radiometer using aperture synthesis, which refer to those baselines which are formed between the regular receivers (light-weight cost-efficient front-end) and the reference radiometers. These baselines require special attention, since the reference radiometers are noise-injection radiometers, which inject noise to the measured signal, whereas the regular receivers are total power receivers.
CitationColliander, A; Torres, F; Corbella, I. Correlation denormalization in interferometric or polarametric radiometers: a unified approach. IEEE Transaction on Geoscience and Remote Sensing, 2009 vol. 47, p. 561-568.
URIhttp://hdl.handle.net/2117/2642
DOI10.1109/TRG.2008.2003247
ISSN0196-2892