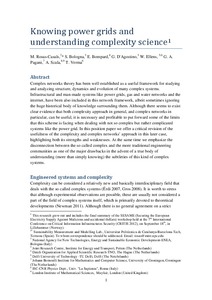 Bologna, Sandro
Bompard, Ettore
D'Agostino, Gregorio
Ellens, Wendy
Pagani, Giuliano A.
Scala, Antonio
Verma, Trivik
Document typeArticle
PublisherInderScience Publishers
Rights accessOpen Access
Abstract
Complex networks theory has been well established as a useful framework for studying and analysing structure, dynamics and evolution of many complex systems. Infrastructural and man-made systems like power grids, gas and water networks and the internet, have been also included in this network framework, albeit sometimes ignoring the huge historical body of knowledge surrounding them. Although there seems to exist clear evidence that both complexity approach in general, and complex networks in particular, can be useful, it is necessary and profitable to put forward some of the limits that this scheme is facing when dealing with not so complex but rather complicated systems like the power grid. In this introductory paper, we offer a critical revision of the usefulness of the complexity and complex networks’ approach in this later case, highlighting both its strengths and weaknesses. At the same time we emphasise the disconnection between the so called complex and the more traditional engineering communities as one of the major drawbacks in the advent of a true body of understanding, more than simply knowing the subtleties of this kind of complex systems.
CitationRosas-Casals, M. [et al.]. Knowing power grids and understanding complexity science. "International Journal of Critical Infrastructures", 02 Febrer 2015, vol. 11, núm. 1, p. 4-14.
URIhttp://hdl.handle.net/2117/26408
DOI10.1504/IJCIS.2015.067399
ISSN1475-3219
Collections
Share: