Modeling shoreline sand waves on the coasts of Namibia and Angola 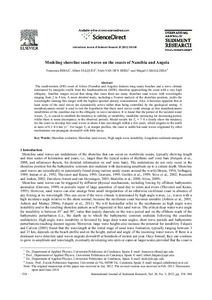 Van den Berg, Niels
Caballería Suriñach, Miquel
Document typeArticle
Rights accessOpen Access
Abstract
The southwestern (SW) coast of Africa (Namibia and Angola) features long sandy beaches and a wave climate dominated by energetic swells from the Southsouthwest (SSW), therefore approaching the coast with a very high obliquity. Satellite images reveal that along that coast there are many shoreline sand waves with wavelengths ranging from 2 to 8 km. A more detailed study, including a Fourier analysis of the shoreline position, yields the wavelengths (among this range) with the highest spectral density concentration. Also, it becomes apparent that at least some of the sand waves are dynamically active rather than being controlled by the geological setting. A morphodynamic model is used to test the hypothesis that these sand waves could emerge as free morphodynamic instabilities of the coastline due to the obliquity in wave incidence. It is found that the period of the incident water waves, Tp, is crucial to establish the tendency to stability or instability, instability increasing for decreasing period, whilst there is some discrepancy in the observed periods. Model results for Tp = 7-8 s clearly show the tendency for the coast to develop free sand waves at about 4 km wavelength within a few years, which migrate to the north at rates of 0.2-0.6 km yr-1. For larger Tp or steeper profiles, the coast is stable but sand waves originated by other mechanisms can propagate downdrift with little decay.
CitationRibas, F. [et al.]. Modeling shoreline sand waves on the coasts of Namibia and Angola. "International journal of sediment research", Setembre 2013, vol. 28, núm. 3, p. 338-348.
URIhttp://hdl.handle.net/2117/26388
DOI10.1016/S1001-6279(13)60044-X
ISSN1001-6279
Collections
Share: