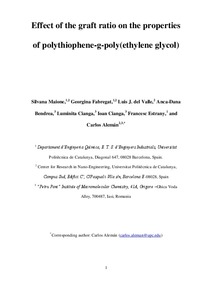 Document typeArticle
Rights accessOpen Access
Abstract
Graft copolymers formed by anchoring poly(ethylene glycol) (PEG) chains to conjugated polythiophene have been prepared by copolymerizing two compounds: unsubstituted -terthiophene (Th-3) and a thiophene-derived macromonomer having an -terthiophene conjugated sequence and one Th-3 bearing a PEG chain with molecular weight of 2000 as substitute at the 3-position of the central heterocycle (Th-3-PEG(2000)). The grafting ratio of the resulting copolymers (PTh3*-g-PEG), which were obtained using 75:25 and 50:50 Th-3-PEG(2000):Th-3 weight ratios, is significantly smaller than that of copolymers derived from polymerization of macromonomers consisting of a -pentathiophene sequence in which the central ring bears a PEG chain of M-w = 2000 (PTh5-g-PEG). The electroactivity and electrochemical stability of PTh3*-g-PEG is not only higher than that of PTh5-g-PEG but also higher than that of PTh3, the latter presenting a very compact structure that makes difficult the access and escape of dopant ions into the polymeric matrix during the redox processes. Furthermore, the optical -(*) lowest transition energy of PTh3*-g-PEG is lower than that of both PTh5-g-PEG and PTh3. These properties, combined with suitable wettability and roughness, result in an excellent behavior as bioactive platform of PTh3*-g-PEG copolymers, which are more biocompatible, in terms of cellular adhesion and proliferation, and electro-compatible than PTh5-g-PEG. (c) 2014 Wiley Periodicals, Inc. J. Polym. Sci., Part B: Polym. Phys. 2015, 53, 239-252
CitationMaione, S. [et al.]. Effect of the graft ratio on the properties of polythiophene-g-poly(ethylene glycol). "Journal of polymer science. Part B, polymer physics", 15 Febrer 2015, vol. 53, núm. 4, p. 239-252.
URIhttp://hdl.handle.net/2117/26387
DOI10.1002/polb.23617
ISSN0887-6266
Publisher versionhttp://onlinelibrary.wiley.com/doi/10.1002/polb.23617/abstract
Collections
Share: