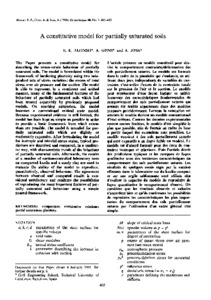 Document typeArticle
PublisherInstitution of Civil Engineers (http://www.ice.org.uk/)
Rights accessOpen Access
Abstract
The Paper presents a constitutive model for describing the stress-strain behaviour of partially saturated soils. The model is formulated within the framework of hardening plasticity using two imdependent sets of stress variables: the excess of total stress over air pressure and the suction. The model is able to represent, in a consistent and unified manner, many of the fundamental features of the behaviour of partially saturated soils which had been treated separately by previously proposed models. On reaching saturation, the model becomes a conventional critical state model. Because experimental evidence is still limited, the model has been kept as simple as possible in order to provide a basic framework from which extensions are possible. Tbe mode1 is intended for partially saturated soils which are slightly or moderately expansive. After formulating the model for isotropic and biaxial stress states, typical predictions are described and compared, in a qualitative way, with characteristic trends of the behaviour of partially saturated soils. Afterwards, the results of a number of suction-controlled laboratory tests on compacted kaolin and a sandy clay are used to evaluate the ability of the model to reproduce, quantitatively, observed behaviour. The agreement between observed and computed results is considered satisfactory and confirms the possibilities of reproducing the most important features of partially saturated soil behaviour using a simple general framework.
CitationAlonso, E.E.; Gens, A.; Josa, A. A constitutive model for partially saturated soils. Géotechnique, 1990, vol. 40, no. 3, pp. 405-430.
URIhttp://hdl.handle.net/2117/2634
Collections
Share: