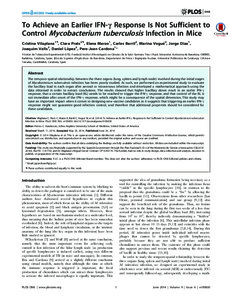 Document typeArticle
Rights accessOpen Access
Abstract
The temporo-spatial relationship between the three organs (lung, spleen and lymph node) involved during the initial stages of Mycobacterium tuberculosis infection has been poorly studied. As such, we performed an experimental study to evaluate the bacillary load in each organ after aerosol or intravenous infection and developed a mathematical approach using the data obtained in order to extract conclusions. The results showed that higher bacillary doses result in an earlier IFN-c response, that a certain bacillary load (BL) needs to be reached to trigger the IFN-c response, and that control of the BL is not immediate after onset of the IFN-c response, which might be a consequence of the spatial dimension. This study may have an important impact when it comes to designing new vaccine candidates as it suggests that triggering an earlier IFN-c response might not guarantee good infection control, and therefore that additional properties should be considered for these candidates.
CitationVilaplana, C. [et al.]. To achieve an earlier IFN-¿ response is not sufficient to control mycobacterium tuberculosis infection in mice. "PLoS one", 24 Juny 2014, vol. 9, núm. 6.
URIhttp://hdl.handle.net/2117/26327
DOI10.1371/journal.pone.0100830
ISSN1932-6203
Publisher versionhttp://www.plosone.org/article/Authors/info:doi/10.1371/journal.pone.0100830
Collections
Share: