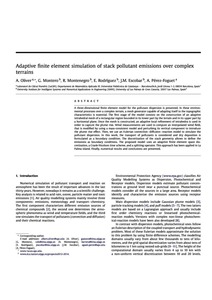 Document typeArticle
Rights accessOpen Access
Abstract
A three-dimensional finite element model for the pollutant dispersion is presented. In these environmental processes over a complex terrain, a mesh generator capable of adapting itself to the topographic characteristics is essential. The first stage of the model consists on the construction of an adaptive tetrahedral mesh of a rectangular region bounded in its lower part by the terrain and in its upper part by a horizontal plane. Once the mesh is constructed, an adaptive local refinement of tetrahedra is used in order to capture the plume rise. Wind measurements are used to compute an interpolated wind field, that is modified by using a mass-consistent model and perturbing its vertical component to introduce the plume rise effect. Then, we use an Eulerian convection–diffusion–reaction model to simulate the pollutant dispersion. In this work, the transport of pollutants is considered and dry deposition is formulated as a boundary condition. The discretization of the stack geometry allows to define the emissions as boundary conditions. The proposed model uses an adaptive finite element space discretization, a Crank-Nicolson time scheme, and a splitting operator. This approach has been applied in La Palma island. Finally, numerical results and conclusions are presented.
CitationOliver, A. [et al.]. Adaptive finite element simulation of stack pollutant emissions over complex terrains. "Energy", 01 Gener 2013, vol. 49, núm. 12, p. 47-60.
URIhttp://hdl.handle.net/2117/26322
DOI10.1016/j.energy.2012.10.051
ISSN0360-5442
Collections
Share: