Industrial engineering in Spain, the challenge of a new liberal profession in the nineteenth century 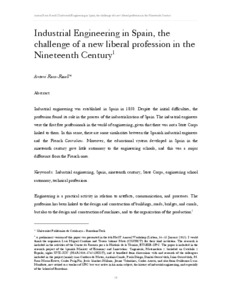 Industrial engineering was established in Spain in 1850. Despite the initial difficulties, the profession found its role in the process of the industrialization of Spain. The industrial engineers were the first free professionals in the world of engineerin g, given that there was not a State Corps linked to them. In this sense, there are some similarities between the Spanish industrial engineers and the French Centraliens . Moreover, the educational system developed in Spain in the nineteenth century gave lit tle autonomy to the engineering schools, and this was a major difference from the French ones
CitationRoca, A. Industrial engineering in Spain, the challenge of a new liberal profession in the nineteenth century. "Host. Journal of History of Science and Technology", 23 Abril 2014, vol. 7, p. 36-51.
URIhttp://hdl.handle.net/2117/26301
ISSNISSN 1646-7752
Publisher versionhttp://johost.eu/vol7_spring_2013/antoni_roca_rosell.htm