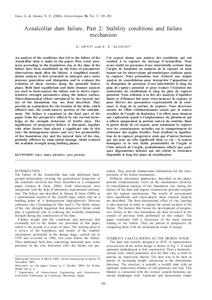 Document typeArticle
PublisherInstitution of Civil Engineers (http://www.ice.org.uk/)
Rights accessOpen Access
Abstract
An analysis of the conditions that led to the failure of the Aznalcóllar dam is made in the paper. Pore water pressures prevailing in the foundation clay at the time of the failure have been established on the basis of piezometric observations made after the failure. A simplified consolidation analysis is first presented to interpret pore water pressure generation and dissipation and to evaluate the evolution of shear stresses along the potential failure plane. Both limit equilibrium and finite element analysis are used to back-analyse the failure and to derive representative strength parameters along the failure surface.Three-dimensional effects introduced by the layered natureof the foundation clay are then described. They provide an explanation for the location of the slide, which affected only the south-eastern portion of the embankment. The failure is examined in the final part of the paper from the perspective offered by the current knowledge of the strength behaviour of brittle clays. The significance of progressive failure is discussed, together with other factors that played a significant role in this case: the homogeneous nature and very low permeability of the foundation clay and the natural state of the clay, probably affected by some initial damage, which reduced the available strength along bedding planes.
CitationGens, A.; Alonso, E.E. Aznalcóllar dam failure. Part 2: Stability conditions and failure. Géotechnique, 2006, vol. 56, no. 3, pp. 185-201.
URIhttp://hdl.handle.net/2117/2628
DOI10.1680/geot.2006.56.3.185
Collections
Share: