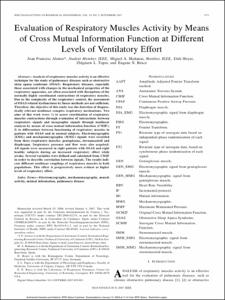 Hoyer, Dirk
Bruce, Eugene N.
Zbigniew L., Topor
Document typeArticle
PublisherInstitute of Electrical and Electronics Engineers
Rights accessOpen Access
All rights reserved. This work is protected by the corresponding intellectual and industrial property rights. Without prejudice to any existing legal exemptions, reproduction, distribution, public communication or transformation of this work are prohibited without permission of the copyright holder
Abstract
Analysis of respiratory muscles activity is an effective technique for the study of pulmonary diseases such as obstructive sleep apnea syndrome (OSAS). Respiratory diseases, especially those associated with changes in the mechanical properties of the respiratory apparatus, are often associated with disruptions of the normally highly coordinated contractions of respiratory muscles. Due to the complexity of the respiratory control, the assessment of OSAS related dysfunctions by linear methods are not sufficient. Therefore, the objective of this study was the detection of diagnostically relevant nonlinear complex respiratory mechanisms. Two aims of this work were: 1) to assess coordination of respiratory muscles contractions through evaluation of interactions between respiratory signals and myographic signals through nonlinear analysis by means of cross mutual information function (CMIF); 2) to differentiate between functioning of respiratory muscles in patients with OSAS and in normal subjects. Electromyographic(EMG) and mechanomyographic (MMG) signals were recorded from three respiratory muscles: genioglossus, sternomastoid and diaphragm. Inspiratory pressure and flow were also acquired. All signals were measured in eight patients with OSAS and eight healthy subjects during an increased respiratory effort while awake. Several variables were defined and calculated from CMIF in order to describe correlation between signals. The results indicate different nonlinear couplings of respiratory muscles in both populations. This effect is progressively more evident at higher levels of respiratory effort.
URIhttp://hdl.handle.net/2117/2623
Collections
Share: