Sediment transport and dispersal in the nearshore of “flash-flood” rivers 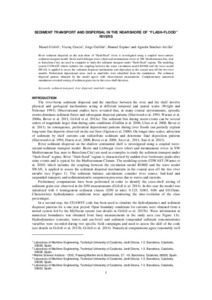 Document typeConference lecture
Rights accessOpen Access
Abstract
River sediment dispersal on the near-shore of “flash-flood” rivers is investigated using a coupled wave-current-sediment transport model. Besòs and Llobregat rivers (short and mountainous rivers in NW Mediterranean Sea, near to Barcelona City) are used as examples to study the sediment transport under “flash-flood” regime. The modeling system COWAST which includes the coupling between the water circulation model ROMS and the wave model SWAN, is applied to assess the sediment dispersal mechanisms and deposition in the coastal area off the two river mouths. Preferential depositional areas such as mud-belts were identified from the simulations. The sediment dispersal pattern obtained by the model agrees with observational measurments. Complementary numerical simulations revealed sorting of sediment grain size in the cross-shelf direction.
CitationGrifoll, M. [et al.]. Sediment transport and dispersal in the nearshore of “flash-flood” rivers. A: International Conference on Coastal Engineering. "Proceedings of 34th International Conference on Coastal Engineering". Seoul: 2014, p. 1-5.
URIhttp://hdl.handle.net/2117/26211
DOI10.9753/icce.v34.sediment.51
ISBN978-0-9896611-2-6
Publisher versionhttps://icce-ojs-tamu.tdl.org/icce/index.php/icce/article/view/7491/pdf_812
Collections
Share: