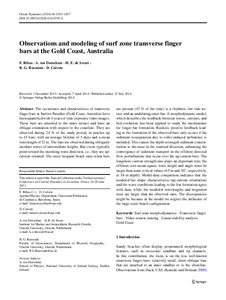 Document typeArticle
Rights accessOpen Access
Abstract
The occurrence and characteristics of transverse finger bars at Surfers Paradise (Gold Coast, Australia) have been quantified with 4 years of time-exposure video images. These bars are attached to the inner terrace and have an oblique orientation with respect to the coastline. They are observed during 24 % of the study period, in patches up to 15 bars, with an average lifetime of 5 days and a mean wavelength of 32 m. The bars are observed during obliquely incident waves of intermediate heights. Bar crests typically point toward the incoming wave direction, i.e., they are up-current oriented. The most frequent beach state when bars are present (43 % of the time) is a rhythmic low-tide terrace and an undulating outer bar. A morphodynamic model, which describes the feedback between waves, currents, and bed evolution, has been applied to study the mechanisms for finger bar formation. Realistic positive feedback leading to the formation of the observed bars only occurs if the sediment resuspension due to roller-induced turbulence is included. This causes the depth-averaged sediment concentration to decrease in the seaward direction, enhancing the convergence of sediment transport in the offshore-directed flow perturbations that occur over the up-current bars. The longshore current strength also plays an important role; the offshore root-mean-square wave height and angle must be larger than some critical values (0.5 m and 20(a similar to), respectively, at 18-m depth). Model-data comparison indicates that the modeled bar shape characteristics (up-current orientation) and the wave conditions leading to the bar formation agree with data, while the modeled wavelengths and migration rates are larger than the observed ones. The discrepancies might be because in the model we neglect the influence of the large-scale beach configuration.
CitationRibas, F. [et al.]. Observations and modeling of surf zone transverse finger bars at the Gold Coast, Australia. "Ocean dynamics", 01 Agost 2014, vol. 64, núm. 8, p. 1193-1207.
URIhttp://hdl.handle.net/2117/26208
DOI10.1007/s10236-014-0719-4
ISSN1616-7341
Publisher versionhttp://link.springer.com/article/10.1007%2Fs10236-014-0719-4
Collections
Share: