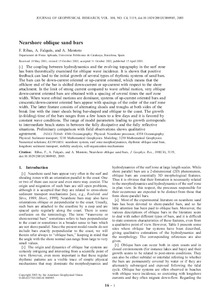 The coupling between hydrodynamics and the evolving topography in the surf zone has been theoretically examined for oblique wave incidence. It is shown that positive feedback can lead to the initial growth of several types of rhythmic systems of sand bars. The bars can be down-current oriented or up-current oriented, which means that the offshore end of the bar is shifted down-current or up-current with respect to the shore attachment. In the limit of strong current compared to wave orbital motion, very oblique down-current oriented bars are obtained with a spacing of several times the surf zone width. When wave orbital motions are dominant, systems of up-current oriented bars and crescentic/down-current oriented bars appear with spacings of the order of the surf zone width. The latter feature consists of alternating shoals and troughs at both sides of the break line with the inner shoals being bar-shaped and oblique to the coast. The growth (e-folding) time of the bars ranges from a few hours to a few days and it is favored by constant wave conditions. The range of model parameters leading to growth corresponds to intermediate beach states in between the fully dissipative and the fully reflective situations. Preliminary comparison with field observations shows qualitative agreement.
CitationRibas, F.; Falques, A.; Montoto, A. Nearshore oblique sand bars. "Journal of geophysical research", Abril 2003, vol. 108, núm. C4 (3119), p. 1-17.
URIhttp://hdl.handle.net/2117/26202
ISSN0148-0227