Theoretical investigation of the time-dependent behaviour of rockfill 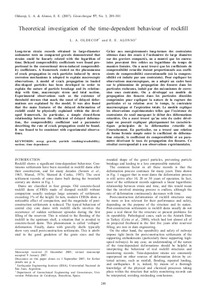 Except where otherwise noted, content on this work is licensed under a Creative Commons license : Attribution-NonCommercial-NoDerivs 3.0 Spain
Abstract
Long-term strain records obtained in large-diameter oedometer tests on compacted gravels demonstrated that strains could be linearly related with the logarithm of time. Delayed compressibility coefficients were found proportional to the conventional stress-induced compressibility coefficients. A framework rooted on the phenomenon of crack propagation in rock particles induced by stress corrosion mechanisms is adopted to explain macroscopic observations. A model of crack propagation in loaded disc-shaped particles has been developed in order to explain the nature of particle breakage and its relationshipwith time, macroscopic stress and total suction.Experimental observations such as the existence of threshold stresses that mark the onset of delayed deformations are explained by the model. It was also foundthat the main features of the delayed deformation of rockfill could be physically explained within the developed framework. In particular, a simple closed-form relationship between the coefficient of delayed deformation, the compressibility coefficient and a parameter describing the rate of crack propagation could be found. It was found to be consistent with experimental observations.
CitationOldecop, L.A.; Alonso, E.E. Theoretical investigation of the time-dependent behaviour of rockfill. Géotechnique, 2007, vol. 57, no. 3, pp. 289-301.
URIhttp://hdl.handle.net/2117/2620
DOI10.1680/geot.2007.57.3.289
Collections
Share: