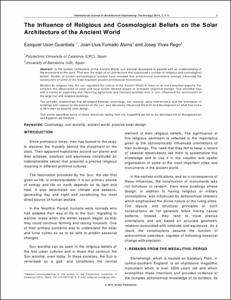 Vives Rego, José
Document typeArticle
Rights accessOpen Access
Abstract
In the earliest civilizations of the Ancient World, sun worship developed in parallel with an understanding of the movement of the stars. That was the origin of an architecture that expressed a number of religious and cosmological beliefs. Studies of ancient archaeological remains have revealed that astronomical orientations strongly influenced the construction of some of the most important ancient architectural monuments. Besides its religious role, the sun regulated the culture of the Ancient World in many of its more practical aspects. For instance, the observation of solar and lunar cycles allowed people to anticipate seasonal change. This provided man with a means of organizing and improving agricultural and livestock activities and, in turn, influenced the construction of the large civil and religious buildings. The complex relationships that developed between cosmology, sun worship, early mathematics, and the orientation of buildings with respect to the position of the sun, also decisively influenced the birth and development of what has come to be known as passive solar design. This article describes some of these influences dating from the megalithic period to the development of Mesopotamian and Egyptian architecture.
CitationUson, E.; Fumado, J.; Vives, J. The influence of religious and cosmological beliefs on the solar architecture of the ancient world. "International Journal of Architectural Engineering Technology", 09 Gener 2015, vol. 1, núm. 1, p. 3-11.
URIhttp://hdl.handle.net/2117/26125
ISSN2409-9821
Publisher versionhttp://www.avantipublishers.com/international-journal-of-architectural-engineering-technology/
Collections
Share: