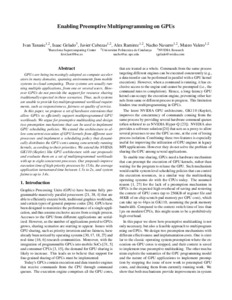 Document typeConference report
PublisherInstitute of Electrical and Electronics Engineers (IEEE)
Rights accessOpen Access
European Commission's projectROMOL - Riding on Moore's Law (EC-FP7-321253)
Abstract
GPUs are being increasingly adopted as compute accelerators in many domains, spanning environments from mobile systems to cloud computing. These systems are usually running multiple applications, from one or several users. However GPUs do not provide the support for resource sharing traditionally expected in these scenarios. Thus, such systems are unable to provide key multiprogrammed workload requirements, such as responsiveness, fairness or quality of service. In this paper, we propose a set of hardware extensions that allow GPUs to efficiently support multiprogrammed GPU workloads. We argue for preemptive multitasking and design two preemption mechanisms that can be used to implement GPU scheduling policies. We extend the architecture to allow concurrent execution of GPU kernels from different user processes and implement a scheduling policy that dynamically distributes the GPU cores among concurrently running kernels, according to their priorities. We extend the NVIDIA GK110 (Kepler) like GPU architecture with our proposals and evaluate them on a set of multiprogrammed workloads with up to eight concurrent processes. Our proposals improve execution time of high-priority processes by 15.6x, the average application turnaround time between 1.5x to 2x, and system fairness up to 3.4x.
CitationTanasic, I. [et al.]. Enabling preemptive multiprogramming on GPUs. A: International Symposium on Computer Architecture. "ISCA 2014: the 41st Annual International Symposium on Computer Architecture: June 14-18, 2014: Minneapolis, MN, USA". Minneapolis: Institute of Electrical and Electronics Engineers (IEEE), 2014, p. 193-204.
URIhttp://hdl.handle.net/2117/26093
DOI10.1109/ISCA.2014.6853208
ISBN978-147994396-8
Publisher versionhttp://ieeexplore.ieee.org/xpl/articleDetails.jsp?tp=&arnumber=6853208&queryText%3DEnabling+preemptive+multiprogramming+on+GPUs
Collections
Share: