Balanced partitions of 3-colored geometric sets in the plane 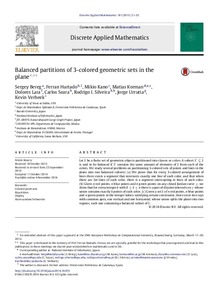 Let SS be a finite set of geometric objects partitioned into classes or colors . A subset S'¿SS'¿S is said to be balanced if S'S' contains the same amount of elements of SS from each of the colors. We study several problems on partitioning 33-colored sets of points and lines in the plane into two balanced subsets: (a) We prove that for every 3-colored arrangement of lines there exists a segment that intersects exactly one line of each color, and that when there are 2m2m lines of each color, there is a segment intercepting mm lines of each color. (b) Given nn red points, nn blue points and nn green points on any closed Jordan curve ¿¿, we show that for every integer kk with 0=k=n0=k=n there is a pair of disjoint intervals on ¿¿ whose union contains exactly kk points of each color. (c) Given a set SS of nn red points, nn blue points and nn green points in the integer lattice satisfying certain constraints, there exist two rays with common apex, one vertical and one horizontal, whose union splits the plane into two regions, each one containing a balanced subset of SS.
CitationBereg, S. [et al.]. Balanced partitions of 3-colored geometric sets in the plane. "Discrete applied mathematics", 2015, vol. 181, p. 21-32.
URIhttp://hdl.handle.net/2117/26089
DOI10.1016/j.dam.2014.10.015
ISSN0166-218X
Publisher versionhttp://www.sciencedirect.com/science/article/pii/S0166218X14004326