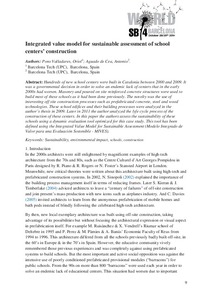 Document typeConference report
Rights accessOpen Access
Abstract
Hundreds of new school centers were built in Catalonia between 2000 and 2009. It was a governmental decision in order to solve an endemic lack of centers that in the early 2000s had worsen. Masonry and poured on site reinforced concrete structures were used to build most of these schools as it had been done previously. The novelty was the use of interesting off site construction processes such as prefabricated concrete, steel and wood technologies. These school edifices and their building processes were analyzed in the author’s thesis in 2009. Later in 2011 the author analyzed the lyfe cycle process of the construction of these centers. In this paper the authors assess the sustainability of these schools using a dynamic evaluation tool optimized for this case study. This tool has been defined using the Integrated Value Model for Sustainable Assessment (Modelo Integrado de Valor para una Evaluación Sostenible - MIVES).
CitationPons-Valladares, O.; Aguado, A. Integrated value model for sustainable assessment of school centers construction. A: World Sustainable Building Conference. "World Sustainable Building 2014". Barcelona: 2014, p. 9-15.
URIhttp://hdl.handle.net/2117/26075
Collections
Share: