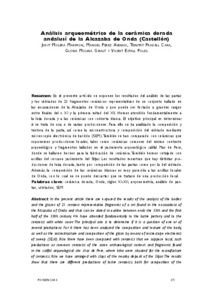 In the present article there are exposed the results of the analysis of the bodies and the glazes of 21 ceramic representative fragments of a set found in the excavations of the Alcazaba of Onda and that can be dated in outline between ends the XIth and the first half of the XIIth centur y. We have attended fundamentally to the lustre potter y and to the ceramics with white cover. The principal aim is to determine if it is a question of one or of several productions. For it there has been analyzed the composition and texture of the body, as well as the microstructure and composition of the glaze by means of microscope electronics of sweep (SEM). Also there have been compared with ceramics that we suppose local, such productions as common ceramics of the same archaeological context and fragments found in the califal arqueological site Mas de Pere, where kilns were situated for the manufacture of ceramics. Also we have arranged with clays of the nearby deposit of the Sitjar. The results show that there are different productions of lostre ceramics, both for composition of the bodies and for the glaze. In addition, the composition of the white ceramics is ver y similar to the local clays of Onda, with which it is not possible to reject that it was a question of a local production.
CitationMolera, J. [et al.]. Análisis arqueométrico de la cerámica dorada andalusí de la Alcazaba de Onda (Castellón). A: Congreso Internacional Red Europea de Museos de Arte Islámico. "Actas del I Congreso Internacional Red Europea de Museos de Arte Islámico". Granada: 2012, p. 371-396.
URIhttp://hdl.handle.net/2117/26055
Publisher versionhttp://www.alhambra-patronato.es/fileadmin/proceedings-conference-2012.pdf