The ways of the lustre: looking for the tunisian connection 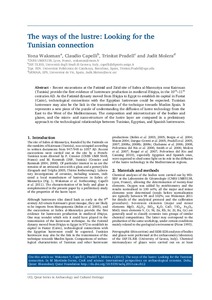 Except where otherwise noted, content on this work is licensed under a Creative Commons license : Attribution 3.0 Spain
Abstract
Recent excavations at the Fatimid and Zirid site of Sabra al-Mansuriya near Kairouan (Tunisia) provide the first evidence of lustreware production in medieval Ifriqiya, in the 10th–11th centuries AD. As the Fatimid dynasty moved from Ifriqiya to Egypt to establish its capital in Fustat (Cairo), technological connections with the Egyptian lustreware could be expected. Tunisian lustreware may also be the link in the transmission of the technique towards Muslim Spain. It represents a new piece of the puzzle of understanding the diffusion of lustre technology from the East to the West of the Mediterranean. The composition and microstructure of the bodies and glazes, and the micro- and nano-structure of the lustre layer are compared in a preliminary approach to the technological relationships between Tunisian, Egyptian, and Spanish lustrewares.
CitationWaksman, Y. [et al.]. The ways of the lustre: looking for the tunisian connection. A: "Craft and science: International perspectives on archaeological ceramics". 2014, p. 109-116.
URIhttp://hdl.handle.net/2117/26037
ISBN978-9927-101-75-5
Publisher versionhttp://www.qscience.com/page/books/uclq-cas
Collections
Share: