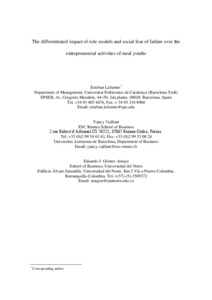 Vaillant, Yancy
Gómez, Eduardo
Document typeConference report
Rights accessOpen Access
Abstract
The main objective of this study is to determine the differential impact of certain socio-cultural variables (such as entrepreneurial self-confidence, role models and fear of failure) on the entrepreneurial process of Spanish rural youths. In consonance with the new rural policy paradigm, the European Commission and the OECD are proposing entrepreneurship as a tool for economic diversification and endogenous rural development. Entrepreneurship is associated in rural areas with economic vitality and prosperity. Entrepreneurship in rural areas becomes a means for capturing and optimizing the true natural, social and human capital of a territory as well as a source of opportunity and welfare for the local population. However, in a context where many rural areas are suffering from an aging and retiring population, the emphasis on developing an entrepreneurially active community becomes especially important within the segment of rural youths. Environmental and social-cultural factors have been used to explain differences in entrepreneurship across territories, including the rural urban divide. This line of research has found that certain variables, such as the local presence of role models and the social stigma of failure, have a differential impact over entrepreneurial activity across certain segments of the population (gender, immigrant status). Therefore, this study has the objective to verify whether age affects the impact that certain socio-cultural variables have on the entrepreneurial process of rural and urban youths. The methodology used in this study is the logistic regression model for rare events, with a database of the Global Entrepreneurship Monitor in Spain for 2009, which has a sample of 26,990 adults. The study shows that young adults in Spain have a higher propensity for entrepreneurial activity than the rest of the population, but discriminating between urban and rural youth, the latter are less likely to be entrepreneurs. Amongst younger-aged individuals, social-cultural factors are found to have a differential impact on entrepreneurship across the rural-urban divide.
CitationLafuente, E.; Vaillant, Y.; Gómez, E. The differentiated impact of role models and social fear of failure over the entrepreneurial activities of rural youths. A: Research in Entrepreneurship and Small Business. "RENT XXVI Research in Entrepreneurship and Small Business : entrepreneurship and creation of wealth for economies, organizations and people. Lyon, France, November 22-23, 2012 : Book of Abstracts". Lyon: 2012, p. 1-44.
URIhttp://hdl.handle.net/2117/25634
ISBN2219-5572
Collections
Share: