Modeling and simulation of chloride diffusion in concrete with recycled aggregates 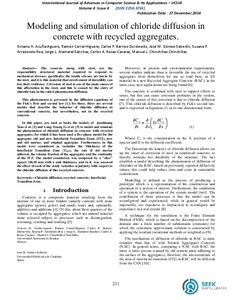 Modeling and simulation of chloride diffusion in concrete with recycled aggregates (819,1Kb)
Share:

Arredondo Rea, Susana Paola
Almaral Sánchez, Jorge Luis
Rosas-Casárez, Carlos A.
Chinchillas Chinchillas, Manuel de Jesús
Document typeArticle
Rights accessOpen Access
Abstract
The concrete along with steel, are the responsibility structural material required to respond to mechanical stresses; specifically, the tensile stresses are borne by the steel, and it is this material that involvement of durability can lose their resilience. Corrosion of steel is one of the main causes of this affectation in the steel, and this is caused by the entry of chloride ions in the called phenomenon diffusion. This phenomenon is governed by the diffusion equations of the Fick's first and second law [1]; for these, there are several models that describe the behavior of chloride diffusion in conventional concrete, but nevertheless, not in the recycled concrete. In this paper, are used as basis, the models of Janzhuang Xiao et al. [2] and Long-Yuang Li et al. [3] to model and simulate the phenomenon of chloride diffusion in concrete with recycled aggregates; for which it has been used a five-phase model for the aggregate: old and new Interfacial Transition Zones (ITZ), new and old mortar, and original aggregate. Furthermore, in this model were considered as variables the Thickness of the Interfacial Transition Zone (TITZ), the rate of old mortar adhered, the volume fraction of the aggregates and the continuity of the ITZ. The model considered, was composed by a
CitationAcuña, O. [et al.]. Modeling and simulation of chloride diffusion in concrete with recycled aggregates. "International Journal of Advances in Computer Science and Its Applications", 27 Desembre 2014, vol. 4, núm. 4, p. 211-215.
URIhttp://hdl.handle.net/2117/25612
ISSN2250-3765
Collections
Share: