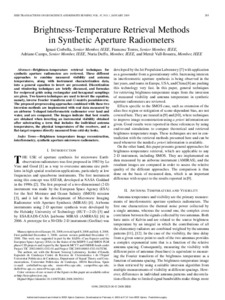 Bightness-temperature retrieval techniques for synthetic aperture radiometers are reviewed. Three different approaches to combine measured visibility and antenna temperatures, along with instrument characterization data, into a general equation to invert are presented. Discretization and windowing techniques are briefly discussed, and formulas for reciprocal grids using rectangular and hexagonal samplings are given. Two known techniques are used to invert the equation, namely, inverse Fourier transform and G-matrix pseudoinverse. The proposed preprocessing approaches combined with these two inversion methods are implemented with real data measured by an airborne Y-shaped interferometric radiometer over land and water, and are compared. The images indicate that best results are obtained when inverting an incremental visibility obtained after substracting a term that includes the individual antenna temperatures, the physical temperatures of the receivers, and a flat-target response directly measured from cold-sky looks.
CitationCorbella, I.; Torres, F.; Camps, A.; Duffon N.; Vall-llosera, M. Brightness-temperature retrival methods in synthetic aperture radiometers. IEEE Transactions on Geoscience and Remote Sensing, 2009, vol. 47, p. 285-294.
URIhttp://hdl.handle.net/2117/2554
DOI10.1109/TGRS.2008.2002911
ISSN0196-2892