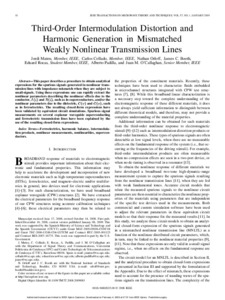 Document typeArticle
PublisherIEEE
Rights accessOpen Access
Abstract
This paper describes a procedure to obtain analytical expressions for the spurious signals generated in nonlinear transmission lines with impedance mismatch when they are subject to small-signals. Using these expressions one can rapidly extract the nonlinear parameters describing the nonlinear effects due to the conductor, L(i) and R(i), such as in superconductors, and/or the nonlinear parameters due to the dielectric, C(v) and G(v) such as in ferroelectrics. The resulting closed-form expressions have been validated by equivalent circuit simulations. Spurious signal measurements on several coplanar waveguide superconducting and ferroelectric transmission lines have been explained by the use of the resulting closed-form expressions.
CitationMateu, J.; Collado, C.; Orloff, N.; Booth, J.C.; Rocas, E.; Padilla, A.; O'Callaghan, J.M. Third-order intermodulation distorsion and harmonic genertion in mismatched weakly nonlinear transmission lines. IEEE Transactions on Microwave Theory and Techniques, 2009, vol. 57, p. 10-18.
URIhttp://hdl.handle.net/2117/2553
DOI10.1109/TMTT.2008.2009083
ISSN0018-9480
Collections
Share: