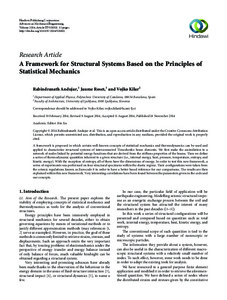 Kilar, Vojko
Document typeArticle
Rights accessOpen Access
Abstract
A framework is proposed in which certain well-known concepts of statistical mechanics and thermodynamics can be used and applied to characterize structural systems of interconnected Timoshenko beam elements. We first make the assimilation to a network of nodes linked by potential energy functions that are derived from the stiffness properties of the beams. Then we define a series of thermodynamic quantities inherent to a given structure (i.e., internal energy, heat, pressure, temperature, entropy, and kinetic energy). With the exception of entropy, all of them have the dimensions of energy. In order to test this new framework, a series of experiments was performed on four structural specimens within the elastic regime.Their configurations were taken from the seismic regulations known as Eurocode 8 in order to have a better based reference for our comparisons. The results are then explained within this new framework. Very interesting correlations have been found between the parameters given in the code and our concepts
CitationAndújar, R.; Roset, J.; Kilar, V. A framework for structural systems based on the principles of statistical mechanics. "Advances in mechanical engineering", Novembre 2014, vol. 2014, núm. Article ID 501802, p. 1-13.
URIhttp://hdl.handle.net/2117/25343
DOI10.1155/2014/501802
ISSN1687-8132
Publisher versionhttp://dx.doi.org/10.1155/2014/501802
Collections
Share: