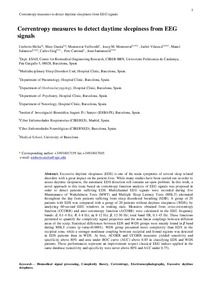 Santamaria, Joan
Document typeArticle
PublisherInstitute of Physics (IOP)
Rights accessOpen Access
Abstract
Excessive daytime sleepiness (EDS) is one of the main symptoms of several sleep related disorders and has a great impact on patients' lives. While many studies have been carried out in order to assess daytime sleepiness, automatic EDS detection still remains an open problem. In this work, a novel approach to this issue based on correntropy function analysis of EEG signals was proposed in order to detect patients suffering from EDS. Multichannel EEG signals were recorded during five Maintenance of Wakefulness Tests (MWT) and Multiple Sleep Latency Tests (MSLT) alternated throughout the day for patients suffering from sleep disordered breathing (SDB). A group of 20 patients with EDS was compared with a group of 20 patients without daytime sleepiness (WDS), by analyzing 60s EEG windows in a waking state. Measures obtained from the cross-correntropy function (CCORR) and auto-correntropy function (ACORR) were calculated in the EEG frequency bands: delta, 0.1-4 Hz;., 4-8 Hz; alpha, 8-12 Hz; beta, 12-30 Hz; total band TB, 0.1-45 Hz. These functions permitted the quantification of complex signal properties and the non-linear couplings between different areas of the scalp. Statistical differences between EDS and WDS groups were mainly found in the beta band during MSLT events (p-value < 0.0001). The WDS group presented more complexity in the occipital zone than the EDS group, while a stronger nonlinear coupling between the occipital and frontal regions was detected in EDS patients than in the WDS group. At best, ACORR and CCORR measures yielded sensitivity and specificity above 80% and the area under ROC curve (AUC) was above 0.85 in classifying EDS and WDS patients. These performances represent an improvement with respect to classical EEG indices applied in the same database (sensitivity and specificity were never above 80% and AUC was under 0.75).
CitationMelia, U. [et al.]. Correntropy measures to detect daytime sleepiness from EEG signals. "Physiological measurement", 01 Octubre 2014, vol. 35, núm. 10, p. 2067-2083.
URIhttp://hdl.handle.net/2117/25214
DOI10.1088/0967-3334/35/10/2067
ISSN0967-3334
Publisher versionhttp://iopscience.iop.org/0967-3334/35/10/2067/pdf/0967-3334_35_10_2067.pdf
Collections
Share: