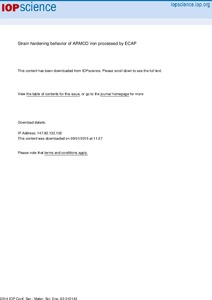 Higuera Cobos, Oscar Fabián
Document typeArticle
PublisherInstitute of Physics (IOP)
Rights accessOpen Access
Abstract
The strain hardening behavior of an ARMCO iron processed by ECAP at room temperature up to sixteen passes following route Bc was investigated through Hollomon and differential Crussard-Jaoul models. Results indicate that the Hollomon analysis shows some deviations from the experimentally determined true stress – true strain curves while the differential Crussard-Jaoul analysis based on the Ludwik equation and the modified Crussard- Jaoul analysis based on the Swift equation fit better when two work hardening exponents are considered. As expected, the strength of the material increased with the number of ECAP passes. Indeed the ultimate tensile stress reached a maximum of ~900MPa after 16 passes, which is more than three times higher than the UTS of the annealed material. Nevertheless, the strain hardening capacity of the material was reduced in comparison with the material without severe plastic deformation. For that reason the tensile ductility was also reduced at increasing ECAP passes. The increase in strength was attributed to the reduction of the grain size through refined sub-grains with high density of dislocations. After sixteenth passes the original grain size (namely 70 mm) was reduced down to 300 to 400 nm observing a good correspondence with the Hall-Petch relationship. The microstructural analysis, carried out by EBSD, showed an increasing amount in the fraction of high Angle Grain Boundaries (HAGB) after 1 pass due to the regeneration of the microstructure with a smaller grain size
CitationCabrera, J.; Muñoz, J.; Higuera, O. Strain hardening behavior of ARMCO iron processed by ECAP. "IOP Conference Series: Materials Science and Engineering (Online)", Juliol 2014, vol. 63, p. 1-8.
URIhttp://hdl.handle.net/2117/25206
DOI10.1088/1757-899X/63/1/012143
ISSN1757-899X
Collections
Share: