Unsteady forces on a circular cylinder at critical Reynolds numbers 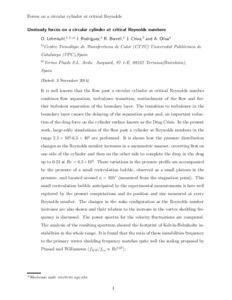 Document typeArticle
Rights accessOpen Access
Abstract
It is well known that the flow past a circular cylinder at critical Reynolds number combines flow separation, turbulence transition, reattachment of the flow, and further turbulent separation of the boundary layer. The transition to turbulence in the boundary layer causes the delaying of the separation point and an important reduction of the drag force on the cylinder surface known as the drag crisis. In the present work, large-eddy simulations of the flow past a cylinder at Reynolds numbers in the range 2.5 × 105-6.5 × 105 are performed. It is shown how the pressure distribution changes as the Reynolds number increases in an asymmetric manner, occurring first on one side of the cylinder and then on the other side to complete the drop in the drag up to 0.23 at Re = 6.5 × 105. These variations in the pressure profile are accompanied by the presence of a small recirculation bubble, observed as a small plateau in the pressure, and located around ¿ = 105° (measured from the stagnation point). This small recirculation bubble anticipated by the experimental measurements is here well captured by the present computations and its position and size measured at every Reynolds number. The changes in the wake configuration as the Reynolds number increases are also shown and their relation to the increase in the vortex shedding frequency is discussed. The power spectra for the velocity fluctuations are computed. The analysis of the resulting spectrum showed the footprint of Kelvin-Helmholtz instabilities in the whole range. It is found that the ratio of these instabilities frequency to the primary vortex shedding frequency matches quite well the scaling proposed by Prasad and Williamson [“The instability of the separated shear layer from a bluff body,” Phys. Fluids 8, 1347 (1996); “The instability of the shear layer separating from a bluff body,” J. Fluid Mech. 333, 375–492 (1997)] (f KH /fvs ¿ Re 0.67).
CitationLehmkuhl, O. [et al.]. Unsteady forces on a circular cylinder at critical Reynolds numbers. "Physics of fluids", 23 Desembre 2014, vol. 26, p. 125110-1-125110-22.
URIhttp://hdl.handle.net/2117/25143
DOI10.1063/1.4904415
ISSN1070-6631
Publisher versionhttp://scitation.aip.org/content/aip/journal/pof2/26/12/10.1063/1.4904415
Collections
Share: