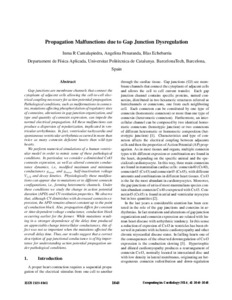 Except where otherwise noted, content on this work is licensed under a Creative Commons license : Attribution-NonCommercial-NoDerivs 3.0 Spain
Abstract
Gap junctions are membrane channels that connect the cytoplasm of adjacent cells allowing the cell-to-cell electrical coupling necessary for action potential propagation. Pathological conditions, such as malformations in connexins, mutations affecting phosphorylation of regulatory sites of connexins, alterations in gap junction organization, and type and quantity of connexin expression, can impede the normal electrical propagation. All these malfunctions can produce a dispersion of repolarization, implicated in ventricular arrhythmias. In fact, ventricular tachycardia and spontaneous ventricular arrhythmia occurred in more than twice as many connexin deficient hearts than wild-type hearts. We perform numerical simulations of a human ventricular model in order to mimic some of these pathological conditions. In particular, we consider a diminished Cx43 connexin expression, as well as altered connexin conductance dynamics, i.e., modified maximum and minimum conductances gmax and gmin, half-inactivation voltage V1=2 and decay kinetics. Physiologically these modifications can appear due to mutations or to different connexin configurations, i.e., forming heteromeric channels. Under these conditions we study the change in action potential duration (APD) and CV-restitution properties. We observe that, although CV diminishes with decreased connexin expression, the APD remains almost constant up to the point of conduction block. Also, propagation differs for constant or time-dependent voltage conductance, conduction block occurring earlier for the former. While mutations resulting in a stronger dependence of the delay time produced an appreciable change intercellular conductances, this effect was not so important when the mutations affected the overall delay time. Thus, our results suggest that a correct description of gap junctional conductance is of big importance for understanding action potential propagation under pathological conditions.
CitationRodriguez, I.; Peñaranda, A.; Echebarria, B. Propagation malfunctions due to gap junction dysregulation. A: Computing in Cardiology. "Computing in Cardiology". Boston: 2014, p. 1045-1048.
URIhttp://hdl.handle.net/2117/25114
DLISSN 0276-6574
ISSN0276-6574
Publisher versionhttp://www.cinc.org/archives.shtml
Collections
Share: