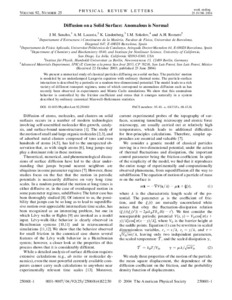 Lindenberg, K.
Sokolov, Igor M.
Romero, A. H.
Document typeArticle
PublisherAmerican Physical Society
Rights accessOpen Access
All rights reserved. This work is protected by the corresponding intellectual and industrial property rights. Without prejudice to any existing legal exemptions, reproduction, distribution, public communication or transformation of this work are prohibited without permission of the copyright holder
Abstract
We present a numerical study of classical particles diffusing on a solid surface. The particles’ motion is modeled by an underdamped Langevin equation with ordinary thermal noise. The particle-surface interaction is described by a periodic or a random two-dimensional potential. The model leads to a rich variety of different transport regimes, some of which correspond to anomalous diffusion such as has recently been observed in experiments and Monte Carlo simulations. We show that this anomalous behavior is controlled by the friction coefficient and stress that it emerges naturally in a system described by ordinary canonical Maxwell-Boltzmann statistics.
CitationSancho, J.M. et al. Diffusion on solif surfaces: anomalous is normal. "Physical Review Letters" 2004, vol. 92, núm. 25, p. 06011-06014.
URIhttp://hdl.handle.net/2117/2509
DOI10.1103/PhysRevLett.92.250601
ISSN0031-9007
Publisher versionhttp://link.aps.org/abstract/PRL/v92/e250601
Collections
Share: