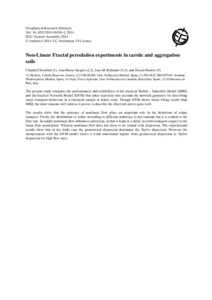 The present study compares the performances and reliabilities of the classical Mobile – Immobile Model (MIM) and the Explicit Network Model (ENM) that takes expressly into account the network geometry for describing tracer transport behaviour in a fractured sample at bench scale. Though ENM shows better fitting results than MIM, the latter remains still valid as it proves to describe the observed curves quite well. The results show that the presence of nonlinear flow plays an important role in the behaviour of solute transport. Firstly the distribution of solute according to different pathways is not constant but it is related to the flow rate. Secondly nonlinear flow influences advection, in that it leads to a delay in solute transport respect to the linear flow assumption. Whereas nonlinear flow does not show to be related with dispersion. The experimental results show that in the study case the geometrical dispersion dominates the Taylor dispersion. However the interpretation with the ENM model shows a weak transitional regime from geometrical dispersion to Taylor dispersion for high flow rates.
CitationChierubini, C. [et al.]. Non-linear fractal percolation experiments in carstic and aggregation soils. A: European Geosciences Union General Assembly. "Geophysical Research Abstracts". Vienna: 2014, p. 16436-16437.
URIhttp://hdl.handle.net/2117/25088
ISBN1607-7962
Publisher versionhttp://www.geophysical-research-abstracts.net/